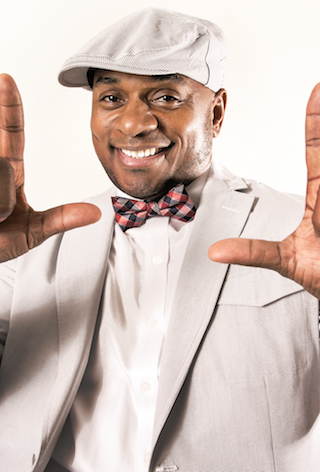 Originally from Detroit, comedian, actor, writer and (sometimes) director, Tony T. Roberts has been blessed with the coveted honor of being the, “Comedians-comedian.” The guy other performers love to watch work. His hilarious and refreshing energetic comedy style has granted him respect and created a huge demand for him on the comedy circuit, here in the states and abroad. Legendary comedian and sitcom director, David Steinberg, acclaimed Tony as, “A breakout talent” after witnessing Tony’s stand-up act and casting him as the lead in a series of funny burger king commercials he directed.

Currently a part of the Bay Area’s KBLX Morning Dream Team, you can catch Tony on the radio Monday - Friday from 5am - 9am. Tony headlines comedy clubs all across the United States. He also tours the country playing theaters and areas as part of The Shaquille O’Neal All Star Comedy Jam Tour and the Nephew Tommy “I Got People Inside My Head” Tour; just to name a few. Tony’s television debut was on HBO’s “DEF COMEDY JAM”, followed by, “IT’S SHOWTIME AT THE APOLLO” , “BET’S COMICVIEW” and THE SHAQUILLE O’NEAL ALLSTAR COMEDY JAM and ABC in the recurring role of CY on UNCLE BUCK.